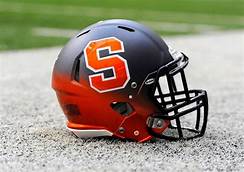 The Expectations are high in Central New York after last season’s ten-win campaign.

The College Football season is right around the corner, and the #1 Football Handicappers at Charliessports.com is ready to bury bookmakers again in 2019-20.

Dino Babers enters his fourth season on the sidelines in the ACC Atlantic division. After they nearly upset BCS Champions Clemon on the road fans expect them to hand the Tigers a loss in the Carrier Dome in 2019. Quarterback Tommy DeVito takes over the reins after Eric Dungy led the offense to (40.2) points per game which ranked 11th in the FBS. Running back Abdul Adams will enter the season number-one in a talented backfield that also includes Jawhar Jordan, Moe Neal, and Jarveon Howard. Offensive coordinator Mike Lynch must replace three productive linemen on a unit that put up (466.8) total yards per contest with a balance of running and passing. DeVito did an adequate job under center but struggled on a national stage against Notre Dame at Yankee Stadium. However, he did show flashes, and Babers believes he has what it takes to perform with consistency this season. Syracuse gets Clemson, Boston College and Pittsburgh at home this season but must travel to Louisville and Florida State with both prominent programs seeking revenge.

Defensive Ends Kendall Coleman and Alton Robison will anchor a defensive line that must get more pressure on the opposing quarterbacks in 2019. Syracuse allowed (264.1) yards per game through the air which ranked 116th in College Football. The entire front four is healthy and should improve stopping the run, which was an area they were reliable. Senior linebackers Lakiem Williams along with Andrew Armstrong make up one of the best tandems in the Atlantic division, but they’re not Miami.

Coordinator Brian Ward has three seniors who’ll start in the secondary including cornerbacks Carl Jones and Christopher Fredrick. An area of concern for the team last season, the 2019 group has a year of experience but so do some of the high powered offenses in the Atlantic Coast Conference. Clemson signal caller Trevor Lawrence was knocked out of the game against Syracuse last season, and they still go the home win. Babers, his staff and all of the alumni have September 14th circled on the calendar as the Tigers will be in the dome on ABC Television. The sports handicapper believes they get it done with DeVito in 2019. Bovada.Lv list the Syracuse Orange win total at nine games for 2019.

Prediction: Syracuse will go 11-1 this season.

Free Pick.  Go over 9 wins for Syracuse this season. Also Play Online Poker Plus Other Casino Games and enter some of the best  Tournaments on the World Wide Web.

Sonny Dyke enters his second season as head coach since coming over from the PAC-Twelve.

The NCAA Football season is right around the corner, and the #1 Football Handicappers at Charliessports.com is ready to bury
bookmakers again in 2019-20.

A 5-7 record for the first season isn’t bad unless you coach in the Lone Star State where expectations of winning in priority. Afterall Chad Morris ed the SMU football program to a bowl berth his finals season in 2017. Sonny Dykes took over after leading a record-setting offense at the University of California, but the unit put up an average of (387.2) ppg which ranked 81st in the FBS. Expectations surrounding the offensive production is the central question the fan base has with Ben Hicks transferring to Arkansas former Texas Longhorns signal-caller Shane Buechele should be the starter. Whoever opens the season under center will have the luxury of wideout James Proche (1,199) receiving yards last season. Notre Dame transfer CJ Sanders along with former West Virginia Mountaineer player Reggie Roberson should form on the of passing attacks in the American Athletic Conference. The nations 119th ranked rushing attack was dead last in the AAC but four lineman return on an offense that gave up plenty of sacks last season and a year experience will pay dividends in 2019. The top team of College Football handicappers at Charliessports.com believes the SMU Mustangs will put plenty of points on the scoreboard this season.

Second-year defensive coordinator Kevin Kane did an admirable job on a unit that couldn’t get of the field due to an inadequate offense. By the fourth quarter, the players couldn’t breathe. The runs defense allowed opponents (199.0) yards per contest which was 98th in the nation while the (35.2) ppg given up was 110th. The Mustangs were better than average against the pass, which is a plus in a conference that features plenty of high-powered offenses. Most of the pass rushers on the edges return, but they’ll be without three of their top four cornerbacks. The safety tandem of Patrick Nelson and Rodney Clemons return, and with all the talent at the prep level with secondary players, it shouldn’t be a problem. Also, the Mustangs would outscore most of their opponents in 2019. Oddsmakers in the Reno/Lake Tahoe area know something because SMU will be FAVORITES in six games this season. They begin the 2019 season against Arkansas State, North Texas and Texas State before a trip to face TCU in Fort Worth. Bovada.Lv list the SMU Mustangs win total at 7′ games for 2019.

Prediction: SMU will go 7-5 this season.

Free Pick.  Go OVER 7′ wins for SMU this season. Also Play Online Poker Plus Other Casino Games and enter some of the best  Tournaments on the World Wide Web.