Charliessports.com produces it for Basketball Betting. Free CBB ATS Predictions are the best in the industry and will continue through the 2020 March Madness Finals in April. We’re always providing BETTOR Friendly cards. Our signature 500-star premium Predictions are unreal & I promise you won’t regret purchasing, cash in Daily.

The (13-5) SU, (8-8-1) ATS Illinois Fighting Illini are on a four-game winning streak after Saturday’s 75-71 victory as 12’point home FAVORITES AGAINST THE LAS VEGAS NUMBER. Guard Trent Frazier led the Fighting Illini with sixteen-points while converting four of seven from beyond the arc. Illinois has dropped four of five to the Boilermakers SU but took down Purdue 63-37 the last time the teams played on January 5, 2020. UNDER bettors have cashed in four of the Illini previous six at home. The Fighting Illini offense averages (75.8) points per game on (30.6%) shooting from the field which ranks 30th in College Basketball. At the other end of the floor, Illinois allows opponents (64.8) ppg on (40.9%) shooting from the field.

A key to an Illinois SU/ATS win is to shoot a high percentage from beyond the arc. The last three Illini wins have come by a total of eight-points and expect a close contest.

The sports handicappers at Charliessports.com are winning at over 69.1% on our 500 star NBA, NCAA Football/Basketball, NHL and NFL Betting Picks with another profitable card today for 35.00. 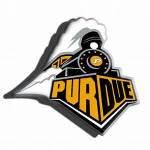 The (10-8) SU, (8-9-1) AGAINST THE SPREAD Purdue Boilermakers have dropped three of four including a 57-50 loss to Maryland as six and a half point road UNDERDOGS. Purdue trailed by sixteen at intermission but outscored Maryland 30 to 21 in the second frame. Purdue is 3-1 ATS their last four at home including a 71-42 victory over top ten ranked Michigan State on January 12th. Purdue has played three of their previous on the road but plays their next two at home. Purdue averages (67.9) on (41.4%) shooting from the field. It’s on the other end of the basketball court where they excel allowing opponents (59.4) ppg which is tenth in College Basketball. The (27.3%) shooting from the field they allow opponent is sixth nationally.

These sports handicappers believe Purdue will get back in the win column with the home-court advantage and by clamping down on defense.

The top team of NCAA Basketball handicappers at Charliessports.com is going with Clemson+11 Points ATS bit it’s not a good MONEYLINE wager.

Bovada.Lv, List the Purdue Boilermakers at +5,000 to win the 2020 NCAA Tournament in April.

Free Prediction. Purdue-3 Points. Also Play Online Poker Plus Other Casino Games and enter some of the best Tournaments on the World Wide Web.

Michigan hosts Wisconsin this weekend at the Big House. It’s the third meeting between the Wolverines and Badgers since the two resumed their rivalry in 2016. The home team won each previous meeting, Wisconsin by two touchdowns last year, Michigan by one the year before. Is it #14 Michigan’s turn again or can the ninth-ranked Badgers win one on the road?

Looking for an advantage?
CharliesSports’ Football Picks give you an edge.
Subscribe now and benefit through the National Title game in January.

Both encounters in the renewed hostilities ended comfortably under the total. Conversely, the four previous meetings, from 2007-10, all went over after the four meetings between 2001-06 were under. Does that mean both coaches have their respective squads playing traditional Michigan and Wisconsin football again? That’s why Jim Harbaugh was hired in Ann Arbor. Despite nine wins between them, however, weak rosters may have more to do with it. 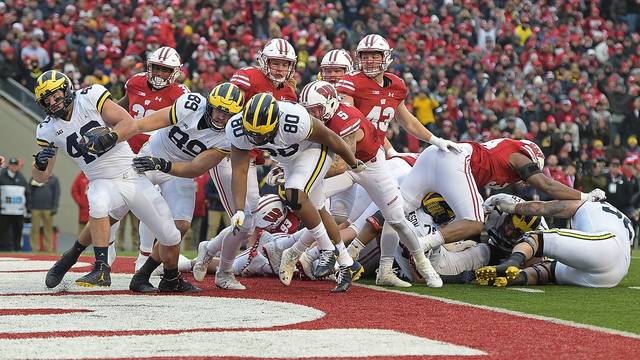 Ben Mason’s touchdown last year wasn’t enough for Michigan. Can the Wolverines do better at home?

At 2-0 in conference play, Wisconsin leads the Big Ten West, although a loss would throw the division wide open. Northwestern, Iowa, Purdue and Illinois each have one defeat. Michigan’s won all three conference games to date, keeping them abreast their chief rivals, Ohio State.

More telling, each school is defeated out of conference.

Michigan fell to Notre Dame to kick off the campaign. Only Northwestern troubled them since. The Wolverines fought back from a 10-point deficit at half-time to avoid a second home defeat with a 20-17 Harbaugh’s squad has moxie. Talent is debatable.

Wisconsin’s schedule hasn’t impressed, either. Their chance for a perfect record ended when the Badgers couldn’t defend Camp Randall Stadium, losing by a field goal to Brigham Young. That’s the same Brigham Young squad who’ve lost their last two games by a combined 80-27 score, with the margin of defeat split almost evenly between #6 Washington [28 pts] and unranked Utah State [25].

Wisconsin couldn’t contain Brigham Young at home. What makes the Badgers think they can handle Michigan on the road?

You may need to look a little lower down the rankings to find both Michigan and Wisconsin when the bowl season rolls around.

As far as this game is concerned, the line took a precipitous dip when it was confirmed that Wisconsin would be without starting defensive end Isaiahh Loudermilk on Thursday. Their other star end, Garrett Rand was already lost for the season with an Achilles injury. Bettor’s shaky confidence in the Badgers crumbled. In less than 24 hours, the line has dipped from Michigan -7.5 to a full -10.

It’s tough to respond to a pair of crushing defeats when a key defensive player goes down with an ankle injury. Wisconsin held an advantage in two aspects of the game before Loudermilk went down. They were disciplined, taking fewer penalties, and were the more effective team in the red zone. With the Badgers ability to pressure Michigan quarterback Shea Patterson taking a hit, you’d expect the junior transfer from Ole Miss to capitalise on drives more often if his teammates can keep their wits about them.

Wisconsin is 1-4 Against The Spread away from home in their last five. Michigan is .500 ATS in their last six. With the Badgers hurtling towards a lost season and injuries taking their toll, everything is pointing towards a resounding Michigan victory, something they can use against a ranked opponent. For all their travails, Wisconsin is ranked, however. this could be a wild one.