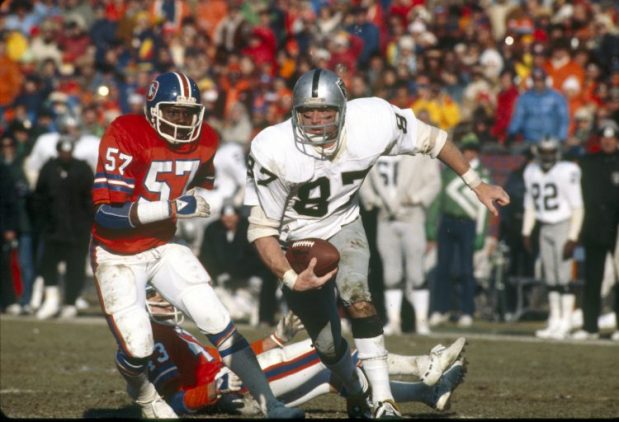 Last week in this space, I looked at the Chargers/Chiefs tilt. The smart money was on Phillip Rivers and co but Andy Reid’s group dumbed it down.

This week, a few good rivalries pop up on the calendar. The Cincinnati Bengals sent the Baltimore Ravens to the Rue Morgue on Thursday night. In the early Sunday games, divisional matchups include the Dolphins and Jets.

Whenever this one rolls around, I always remember the Dan Marino Clock Play in 1994, when he faked spiking the ball then threw a perfect ball underneath to Mark Ingram with the final seconds draining in the fourth quarter for a comeback win.

The Vikings and Packers, Panthers and Falcons also hook up, not to mention a Texans/Titans meeting between new and old Houston franchises. In the late games, the Cardinals and Rams conduct some West Coast business before the Giants’ Sunday Night visit to a Cowboys side who shot themselves in the foot last week.

Since childhood, I’ve favoured AFC West tilts, however. That’s because I was always sent outside to play on Sundays with instructions to

Rules three and four relaxed a little when my mother became pregnant with my sister but as dusk fell around 5pm during southern Ontario winters, West Coast games were the ones I saw most often. Except for the Rams, the NFC West was a lost cause in the 70s, but the AFC West was filled with great teams, even when the Seahawks joined the mix.

I used to root for the Raiders. They had a cool Snake at quarterback long before Kurt Russell hit the theatres in Escape from New York. Mark van Eeghen was a great rushing fullback who paved the way until Marcus Allen arrived. That was before the 49ers began teaching their blocking backs to catch passes. Dave Casper was a brilliant tight end who could do no wrong, even when he fumbled on the goal line. Fred Biletnikoff could catch anything Ken Stabler threw in his direction. So could Lester the Molester Hayes with respect to opposing QBs. I wore his jersey and kept asking the local Canadian Tire to stock Stickum in the sports department even after the league banned it. 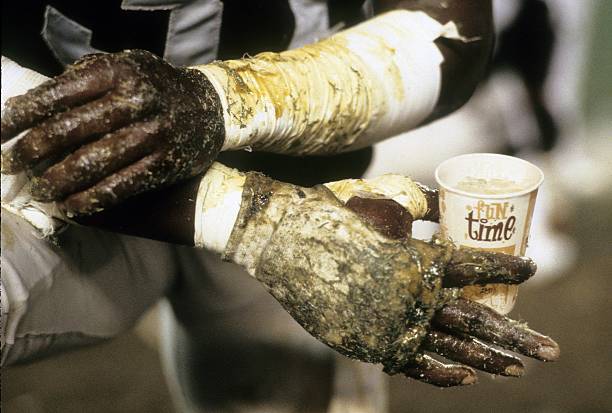 To Lester Hayes’ delight, the Raiders’ clubhouse had no signs stating employees must wash their hands before returning to work.

The Broncos were a tough side even before John Elway arrived. An ageing Craig Morton took them to their first Super Bowl humiliation against the Cowboys but the Raiders always won theirs when they made it to the big dance.

Things change over the course of a lifetime. Al Davis’ defiance turned into bitterness. The Raiders lost a Super Bowl to former coach Jon Gruden. People point to Marcus Allen’s defection but drafting Todd Marinovich was the beginning of the end. JaMarcus Russell merely confirmed the team’s mediocrity. Even a second turn from Kurt Russell as Snake Plissken in Escape from LA couldn’t help.

Recent seasons brought hope. Derek Carr has an arm when healthy. Management doesn’t inspire, though. Bringing back Gruden to coach after a decade in the booth and Marshawn Lynch following a year in retirement isn’t long-term thinking.

Week 1 proved woeful for the Silver and Black. Carr threw three interceptions. Lynch was limited to just 11 carries for 41 yards when the team began chasing the game. Jared Goff and the Rams picked the defense apart. Chucky needs to turn things around before Mark Davis decides to replace him with Jennifer Tilly. 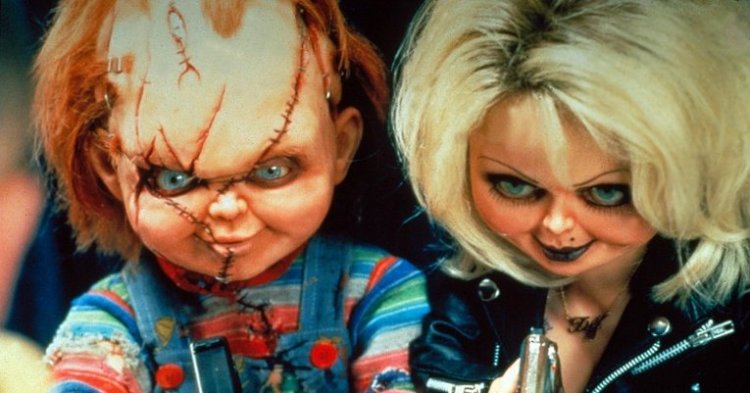 All’s fair in love and football.

Denver’s management is another story. John Elway knows what he’s doing. After rotating through Trevor Siemian, Brock Osweiler and Paxton Lynch following Peyton Manning’s retirement, the team president settled on career backup Case Keenum, this season. The move paid dividends against the Seahawks in Week 1. Keenum threw for over 300 yards and three touchdowns to eke out a 27-24 victory. Emmanuel Thomas was the main target with 10 catches for 135 yards and a score. Phillip Lindsay and Royce Freeman split the rushing duties down the middle. Each had 15 carries for 71 yards.

The game was close in part because Keenum also matched Derek Carr with three interceptions. Denver coach Vance Joseph expects that to change in Week 2 but expect Gruden’s front seven to pressure Keenum, testing his resilience. Von Miller and the Broncos defense will be hunting Carr, as well.

Running backs pounding the ball. Quarterbacks airing it out. Defensive ends sacking them or forcing bad passes. Cornerbacks picking them off. This game should be an AFC West renaissance fair. I plan to dress the part. With a few alterations, I can still squeeze into that Lester Hayes jersey. I bet I can even find some Stickum on eBay.

Charliessports.com produces it for Football Betting. NFL Predictions are the best in the industry and will continue through the Superbowl in February of 2019. It’s been twenty-five years since the Raiders returned to the East Bay and emotions are running high with a planned relocation to Las Vegas. Fans at Oakland–Alameda County Coliseum support their team unlike any in Football, decorated in Raider apparel on any given Sunday. Owner Mark Davis fired Jack Del Rio at the conclusion of the 2017 season; his replacement is fifty-four year old Jon Gruden. Raider nation remembers their new head coach as they architect of a Tampa Bay team that destroyed their Raiders 48-21 in Super bowl XXXVII. After making the postseason in 2016-17 expectations were  through the roof last year, can Gruden get the silver and black to the promiseland? 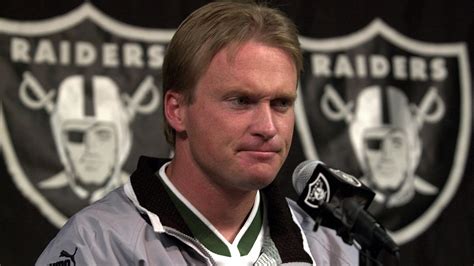 Quarterback Derek Carr led their eighteenth-ranked offense last season with (3,496) yards passing with double interceptions the previous season. First-year offensive coordinator Greg Olson is thrilled to have a chance to make some corrections in Carr’s mechanics; he did a masterful job with Jared Goff as quarterbacks coach with the Los Angeles Rams last year. Running Back Marshawn Lynch led one of the worst ground game in the NFL with 891 yards rushing, former Tampa Bay star Doug Martin could supplant “Beast Mode” entering the season. To strengthen things up front, Gruden drafted offensive tackle Kolton Miller with the fifteenth overall pick in 2018. All-Pro guard Kelechi Osemele will anchor a unit that must get better in both run blocking and pass protecting. Wide Receiver Amari Cooper also took a step back after making the pro-bowl his first two seasons mostly due to being double-teamed. Martavis Bryant was signed to the roster, but his conduct could determine if he stays in Oakland, Gruden’s ability to deal with troubled players could help Bryant. The bottom line is Oakland’s offense needed a new look, and they will compete in every game in 2018-19. 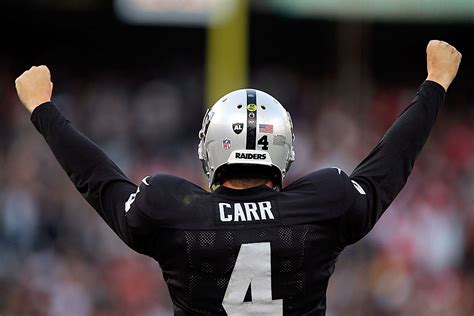 Forty-six-year-old Paul Guenther spent the last three years in Cincinnati with the same title and now joins Gruden’s staff, it will be different from Marvin Lewis. The Raiders defense allowed opponents (350.1) total yards per contest last year, and their pass defense ranked twenty-sixth out of thirty-two teams. All-Pro defensive End Khalil Mack has to help the secondary out but getting more pressure of the quarterback this season and Guenther will devise schemes to maximize Mack’s talent. Former Seattle standout Bruce Irvin could be the odd man out with a new staff doing things differently. Defensive tackle Mario Edwards Jr. Is getting better with each snap of the football and, former Chiefs star Derrick Johnson will help the maturation process of a young group of linebackers. 2017 first round draft pick Gareon Conley along with hard-hitting safety Karl Joseph fit Gruden’s style perfectly, and veteran Reggie Nelson has familiarity from his time in Cincinnati. The Raider defense will be aggressive and will play with discipline. Bovada.Lv, list the Oakland Raiders at 11/4 to win the 2018-19 American Football Conference West Division Title.

Free Pick. The 2018-19 Oakland Raiders will go 10-6 in the regular season Also, Play Online Poker Plus Other Casino Games and enter some of the best  Tournaments on the World Wide Web.