Some people call it riding the hot hand. Others say it’s jumping on the bandwagon. Either way, the Miami Dolphins are yesterday’s news while the Chicago Bears trend viral like Captain Trips. The two teams meet Sunday at whatever they’re calling the former Joe Robbie Stadium this week.

Want to make a splash on this weekend’s games?
CharliesSports’ Football Picks won’t leave you lost in the woods.
Subscribe now and benefit all the way to the Super Bowl.

Sixty per cent of the betting public back da Bears following their spectacular 48-10 route of the Tampa Bay Buccaneers at Soldier Field. Quarterback Mitch Trubisky, whose surname still almost rhymes with ‘who is he?’ threw for 354 yards and six touchdowns while completing 19/26 passes. He also ran for another 53 yards, accounting for 92.5% of Chicago’s offensive output. Head coach and former arena football QB Matt Nagy’s offensive scheme receives the most credit for the Monsters of the Midway’s revival. It seems apropos with Michael Myers return to the screen at month’s end in the Hallowe’en reboot. 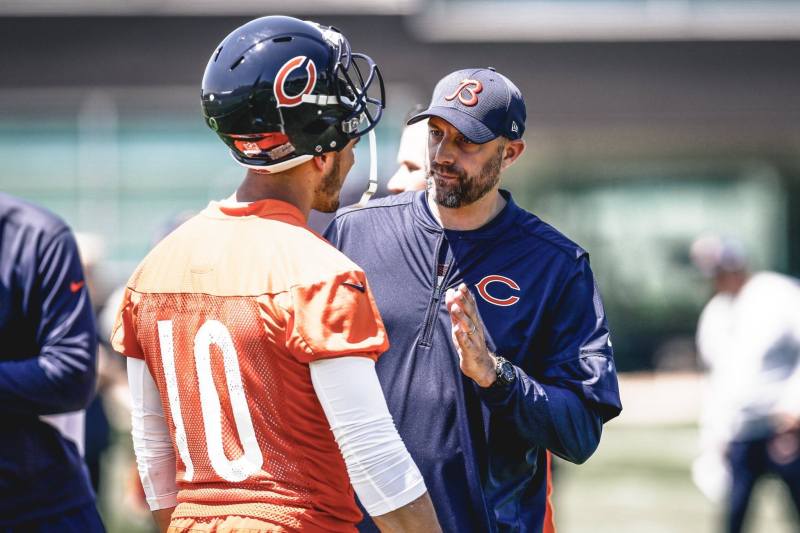 Mitch Trubisky and Matt Nagy get their signals straight.

Meanwhile, the Dolphins are experiencing Donald Trump-like support numbers after two consecutive losses. Their uninspiring trip to Foxborough, where the Patriots handed them their helmets, was unsucceeded by a stunning capitulation in Cincinnati despite leading by 14 at the half. Once again, Miami are pretenders in most fans’ eyes.

The experts aren’t so convinced. They’re leaning slightly towards Adam Gase’s squad to win this one at home, where they’re undefeated on the young season, despite the line holding steadily at +3.5 for the past two days. Nor can handicappers make up their minds regarding the total [41.5], which at least tells you they don’t expect Trubisky and his receivers to run riot on the road against the stellar Miami secondary.

That doesn’t mean the Bears won’t be a handful for the Dolphins defence. Nagy’s system is a fluid attack designed to exploit the soft spots in a defence on a play-by-play basis, using pre-snap motion to force opponents into tipping their hand. If a team is loading up against the run, they’ll go wide or over the top. If it’s spread, they’ll exploit the gaps.

Gase isn’t overmatched as a strategist. You don’t jump out to big half-time leads as the Dolphins did against Cincinnati or roar back from behind like they did against the Raiders without decent schemes. The problems are consistent execution and game management. Ryan Tannehill shouldn’t be throwing interceptions with a big lead. He should barely be throwing at all. Pound the ball; eat the clock. 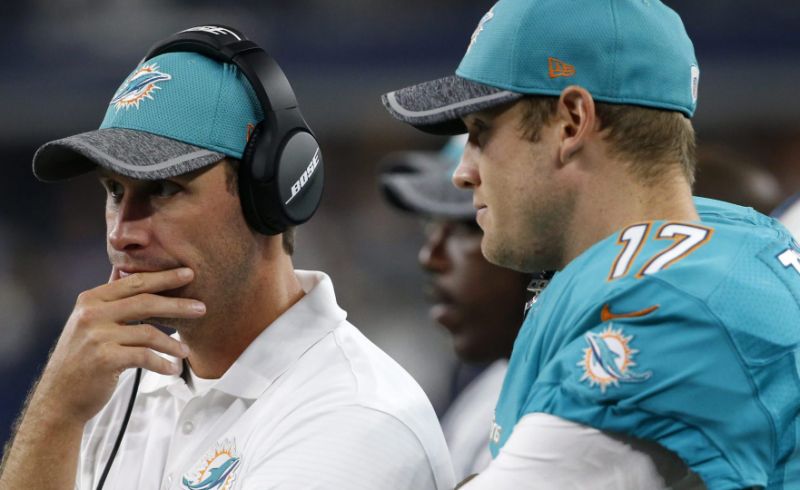 Adam Gase searches for a way to make Ryan Tannehill understand why interceptions are bad.

Historically, the teams tend to trade wins. The Bears last won back-to-back against Miami in 1994 and ’97. The Dolphins haven’t done it since 1979 and ’85, the second game being the one where Dan Marino ended Mike Ditka’s run at a perfect season. The Dolphins came away 27-14 winners in 2014’s last meeting between the pair.

More recently, Miami are 1-4 against the spread versus winning teams while Chicago’s taken the under in their last four after winning by at least two touchdowns. The Dolphins have also gone under in their last four against winning teams. You have to pit those trends against the team’s mood after two embarrassing defeats away from home and their determination to keep their season above water. 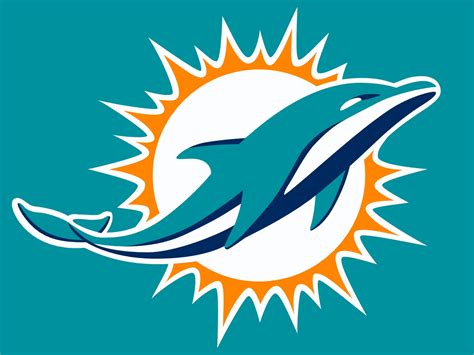 Charliessports.com produces it for Football News. NFL Point Spread Predictions are the best in the industry and will continue through the Super Bowl in February of 2019. After making the playoff as a wildcard in 2016-17 head coach Adam Gase experience a sophomore slump finishing with only six victories, as usual controversy followed Miami last season with Jay Ajayi getting traded in October which was a bad move and Jarvis Landry got shipped off to Cleveland in the offseason. Making matters worse they lost their quarterback before the season began forcing Gase to call Jay Cutler out of retirement, another mistake. We are in year three of the Adam Gase experience, and there is plenty of work to be done at Dolphins camp, but owner Stephen Ross continues to have a positive mindset. The question is will he hire the thirteenth head coach in franchise history at the end of the season.

It’s evident to Miami Dolphins fan that Gase is not sold on Tannehill and to prove it he signed Brock Osweiler who the coach in Denver. All indications are that Tannehill is the starter with Osweiler serving as the backup but don’t count on it. The quarterback carousel has to come to an end, and it won’t happen until either coach or signal-caller leaves South Florida. Without the services of wide receiver Jarvis Landry who was their most valuable asset, it’ll be up to former New England slot receiver Danny Amendola or Albert Wilson to shine. The Dolphins rushing attack ranked twenty-fifth in the NFL last season with just (86.8) yards per contest which is why they brought in former University of Miami star Frank Gore, they believe he’s got something left in the tank. Kenyan Drake led the team in rushing with (644) yards in 2017 and showed flashes of brilliance. Whoever runs the football they’ll need the offensive line anchored by tackle Laremy Tunsil to open holes, and it’ll have to be without former All-Pro Mike Pouncey. Veteran Josh Sitton comes over from Chicago. A decision has to be made early about the quarterback position for success in Miami. The Dolphins covered the spread in just five games last season; however, Las Vegas will have them, underdogs, most of 2018-19 and usually are a good cover when there are no expectations. 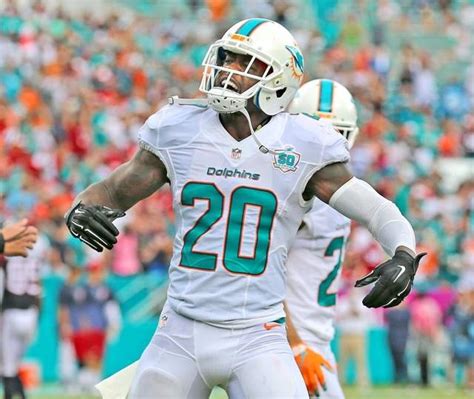 The release of Ndamukong Suh one of Miami’s most celebrated free agents in franchise history will force Davon Godchaux and Jordan Phillips to fill enormous shoes. Miami gave up an average of (24.6) points per contest last season, twenty-ninth league-wide. Defensive coordinator Matt Burke understand there’s work to be done and the acquisition of pass rush specialist Robert Quinn to go along with Cameron Wake looks like a nightmare for offenses on paper, a lot of NFL player personnel directors believe both have lost a step. Linebacker Kiko Alonso has been a model of consistency since arriving in South Florida with rookie Jerome Baker along with his former teammate at Ohio State Raekwon McMillan, there is talent at the position. McMillan missed all of 2017 with a knee injury suffered the first time he took the field in preseason. Minkah Fitzpatrick will make an immediate impact teaming with hard-hitting Reshad Jones, Miami could have the best starting safeties in football. Cornerbacks Cordrea Tankersley and Xavien Howard are getting better with each snap. Getting to the quarterback is a must in 2018-19 for Miami if Quinn and Wake can produce Miami will be formidable, but there is the nightlife on South Beach. Bovada.Lv, list the Miami Dolphins at 12/1 to win the 2018-19 American Football Conference East division Crown.

Free Pick. The 2018-19 Miami Dolphins will go 7-9 in the regular season Also, Play Online Poker Plus Other Casino Games and enter some of the best  Tournaments on the World Wide Web.